And we ain’t talking about the coming autumn. FDCPA, FCRA and TCPA litigation all tumbled in July, after two of the three fell in June as well. May was the last robust month for consumer litigation.

How much did the numbers fall? All three statutes were down between 20% and 40% over the previous month. In fact, we had to go all the way back to January 2015 to find the last time numbers were this low across the board. 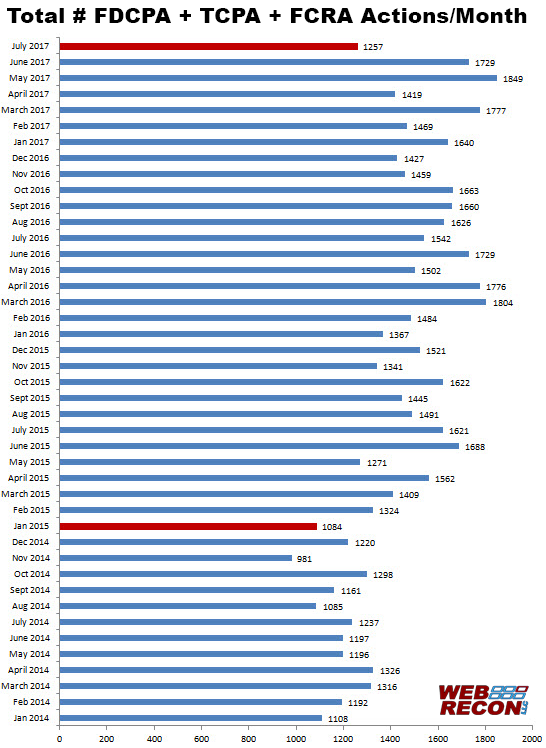 NEW: We are excited to add BBB tracking to our monthly stats. BBB complaints against debt collectors and creditors rose quite a bit over the last month (+11.4%), but are only slightly up YTD from last year (+.9%).

CFPB complaints are continuing their 2017 rally, up 12.4% over last month and a whopping 26.9% over this time last year.

Putative class actions remain relatively stable with 21.5% of FDCPA, 15.6% of TCPA and 9.6% of FCRA lawsuits filed that way.

About 33% of all plaintiffs who filed suit last month had filed at least once before.

And finally, The Sulaiman Law Group overtakes our list of the most active consumer attorneys this month with a total of four entrants – Ahmad Sulaiman (40), Mohammed Badwan (34), Taxiarchis Hatzidimitriadis (28) and Nathan Volheim (28). New York attorney Craig B Sanders keeps the crown for representing the most consumers year-to-date (333).

Litigation Summary (scroll down for BBB and CFPB data):

Number of Unique Plaintiffs for 2017: 8858 (including multiple plaintiffs in one suit)