Quick analysis: Happy Thanksgiving! Amid an unremarkable month, we are prepared to make some official predictions about the final numbers for the year. But first, the month.

About 35% of all plaintiffs who filed suit last month had filed at least once before.

And finally, California attorney Todd M. Friedman stays at the top of the list representing more consumers than anyone else in the month with 35 and New York’s Craig B. Sanders stays at the top of the list for having filed the most of the year with 279. That YTD stat excludes attorneys Nicole Rochelle Lewis and Rebecca Evans who crammed hundreds of plaintiffs into a few TCPA lawsuits earlier this year.

Based on the first ten months of the year, plus projected Nov/Dec numbers based on patterns from Nov/Dec of the last three years (on average about a 15% drop over the rest of the year’s average numbers in those last two months), we are coming up with a slight increase in FCRA, a fairly significant drop in FDCPA, and TCPA holding steady with a statistical tie from 2019.

TCPA had a dramatic rise in the teen years but spent the last couple of years on a downward trend. 2020 looks like it will end in an essential tie with 2019’s 3414 filings, landing at a projected 3417. It is relevant to point out here that this number is a bit skewed by some suits early in the year that crammed many plaintiffs into a few filings, as we count these numbers by plaintiffs represented. So the real number is lower, even if it doesn’t quite feel like it. 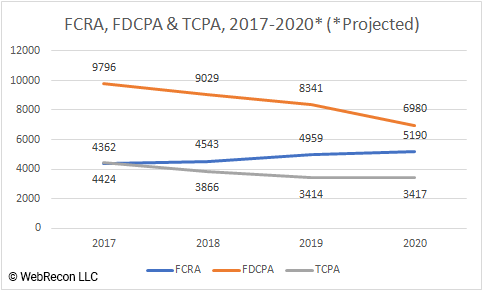 Additionally, CFPB complaints seem to have more than recovered from a big drop last year and look to end the year at their highest projected number yet of 52,116 complaints against debt collectors, vs. 2019’s 46,397 complaints and 2018’s 51,175 complaints.

*** Important Note About CFPB Data ***
We had a bug in our algorithm for tracking CFPB complaints that unintentionally inflated the previous year comparison numbers for the last few months (July, Aug and Sept). This had the unfortunate effect of making it look like CFPB complaints were dramatically lower this year in comparison, when in fact they were not. We deeply regret the error and apologize to the CFPB, ACA and other organizations who rely on our data to analyze the market conditions. The problem has been fixed and we are grateful to the CFPB for working with us to identify the issue.

Finally, we are pleased to reintroduce periodic BBB complaint tracking this month. The big challenge with reporting BBB complaints is that they trickle out much more slowly than lawsuits and CFPB complaints, so this will not be a monthly feature. BBB complaints look like they have dropped precipitously over the last couple of years, but that is exaggerated by an outlier year in 2018 with a remarkable 116,404 complaints recorded. We are projecting 2020 to end quite a bit up over 2017’s 79,250 complaints and 2019’s 84,643 complaints, with around 100,000 complaints filed against debt collectors and creditors. That is a significant increase in consumer complaint activity, but still down from 2018’s high mark. That takes into account several thousand complaints we still expect to see for each month going back as far as June, so the graph below is not particularly helpful on this one. We will make it a point to come back mid-2021 with better numbers for the full year and how it compares to prior years. 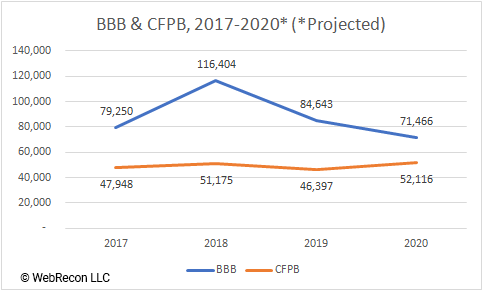 Whew. That was a lot. Go eat some turkey!

Number of Unique Plaintiffs for 2020: 10910 (including multiple plaintiffs in one suit)