It looks like TCPA will end down from the previous year for the first time since, well, ever. Sitting at 3758 (at the end of Oct) with two months to go in 2017, it is really hard to see how TCPA makes up ground to surpass 2015’s record total of 4855 suits. With 1097 suits separating us from last year’s record and 2017’s average of 376 TCPA plaintiffs per month, it just doesn’t seem possible. We’ll see… 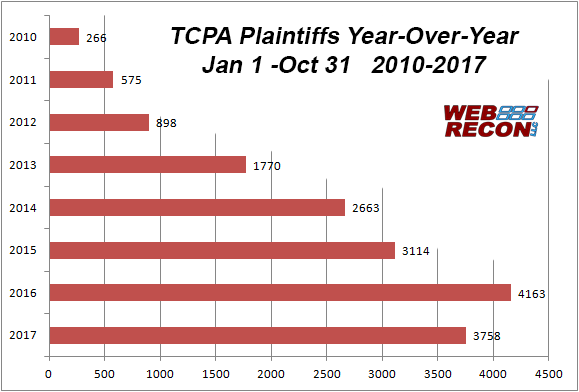 We are still getting a handle on the flow of BBB complaints so don’t read much into the wild swings month-to-month yet. October’s 2421 complaints is a solid number, and it is likely to go up a bit when all the data is in. For reference, Jan-Sept averaged 2930 complaints each month.

And finally, CFPB complaints continue their mad dash to a new record high, up 12.2% over last month and 20.5% over this time last year.

Putative class actions were sky high last month with 24.4% of FDCPA and 24.1% of TCPA class action lawsuits.  An insane 24% of FCRA lawsuits were filed.

And finally, New York attorney Craig B. Sanders took back the crown as the most active consumer attorney this month by representing 38 consumers in October and for representing the most consumers year-to-date (449).

Litigation Summary (scroll down for BBB and CFPB data):

Number of Unique Plaintiffs for 2017: 12425 (including multiple plaintiffs in one suit)