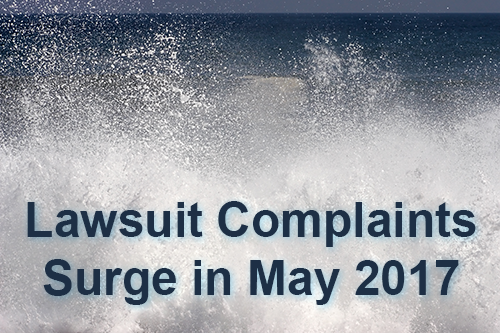 After a month of stunning declines (in April) across the board in consumer litigation, the numbers came roaring back with equally stunning increases in May. The end result? Everything is pretty much back on track, in line with last year and years prior.

Year-to-date, FDCPA is the only one still down a bit from this time last year, trailing 2016 by 2.3%. TCPA is up slightly, with a 1.5% YTD increase and FCRA is stealing the show so far with a 9.7% YTD increase.

After the last few years of TCPA being the most aggressive growth property, maybe the consumer bar is ready to really test new consumer reporting theories.

In contrast to consumer litigation May saw a slight dip in CFPB complaints over April, down 3.7% from last month. That is the second monthly decline in a row, though April’s decline over March was much larger at 12.7%. Even so, these two monthly declines did nothing to stem the YTD complaint explosion so far. The total complaints have increased to 26.9% over this same time last year.

Back to litigation, putative class actions were uneven last month with 24.1% of FDCPA, 13.5% of TCPA and 10.3% of FCRA lawsuits filed that way.

About 34% of all plaintiffs who filed suit last month had filed at least once before.

4012 consumers filed CFPB complaints against debt collectors and about 1561 consumers filed lawsuits under consumer statutes from May 01, 2017 to May 31, 2017. Here is an approximate breakdown:

Number of Unique Plaintiffs for 2017: 6578 (including multiple plaintiffs in one suit)